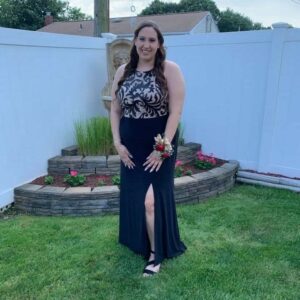 Adrianna DellaVedova is a first-semester freshman at Farmingdale State College, with a story behind why she chose a school so close to home. Before graduating Deer Park High School in 2019, Adrianna thought she knew exactly what she wanted to pursue in college, without any question.

Adrianna always had an interest in helping others with medical ailments, and it led her to decide that she truly had a passion to work in the medical field. During her years in high school, Adrianna was diagnosed with Polycystic Ovarian Syndrome (PCOS), which is a hormonal disorder that affects irregularity of hormone levels and blood sugar levels. As a result of PCOS, Adrianna is also insulin-resistant. Traveling from doctor to doctor and learning more about her disorder, Adrianna became very interested in how the human body works. She decided that she wanted to study nursing at Farmingdale State College.

Adrianna explains that working while attending college is “challenging, but worth it.” She also worked during her months as a senior at Deer Park High School, which gave her a taste of independence. She is continuing to work during college, and balance both work and school. High school taught Adrianna that balance is key. Being able to balance different classes, home life, and cheerleading will lead to overall happiness and success for her.

After the decisions came in the mail from her choice of colleges, she made the decision to commit to Farmingdale State College. It was local enough to commute to, and close to her job. Different from her original plan, Adrianna decided to commit to FSC for their Science, Technology and Society major.

As much as Adrianna was interested in studying nursing, she is also eager to learn about the rapid changes and advancements in technology. She refers to herself as “quick” with our current tech products such as smartphones, laptops, tablets, and efficient use of various programs and applications, such as PhotoShop and Microsoft Office. After meeting with an advisor and learning more about the STS major, Adrianna felt that it was something she’d enjoy studying and be very good at.

Adrianna had a lot of positive things to say about her short time at Farmingdale State College. Her favorite thing about our school is the close location, and availability of Greenley Library to study and do her assignments. Before actually attending college, Adrianna was nervous about what to expect from Farmingdale, but now that she’s been here for three months she considers it her “second home.”

Adrianna’s anticipated graduation date is May 2023. After graduation she wants to pursue a full-time job doing something that makes her happy. At the moment, Adrianna is still indecisive if she wants to study nursing at some point, but she states that helping others makes her happy. In between taking college courses and working part-time, Adrianna admires anything Disney. Adrianna explained that she is currently “planning a vacation to Disney in March 2020 with her sister.” She enjoys planning and organizing vacations, especially ones to Walt Disney World. Her top three favorite Disney princesses are “Belle, Elsa, or Rapunzel.” Some of Adrianna’s hobbies during down-time include watching shows on Netflix, Hulu, and Disney Plus, and also spending quality time with her family whenever she can.

From big college decisions to leisurely planning Disney vacations, Adrianna has genuine advice for incoming freshmen and transfer students to Farmingdale. “Be who you are and do things to impress yourself, not others.” Adrianna has big plans for herself, and she’s very happy to be starting off her goals at Farmingdale State College.