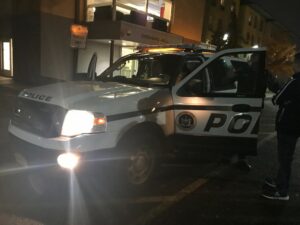 Do you ever wonder what University Police experience? How to avoid those traffic tickets? Or simply ride what’s it like sitting in the front of a patrol car? You may be lucky. You may have read “University Police Ride-Along Well Worth the Trip.” With being an Resident Assistant I already know what goes on in the dorms, but what about around campus? Not to scare you, but the campus is ranked the safest in the State University of New York system. With the ride-along program that University Police offers, it can confirm Farmingdale is indeed safe.

I will share my experience with my ride-along. Initially Lieutenant Zachary Lee gave me a tour of the University Police patrol car, which comes equipped with high technology. Everything from computers and printers, which Lieutenant Lee refers to as his “mobile office,” to firearms and emergency medical kits. Imagine having a mobile office in your car. That’s the dream. The other essentials include radar guns and license-plate scanners. My first line I said when I sat in the front was “first time I ever been in the front seat” – a quote from Fast Five. Lieutenant Lee explains the rules before the ride along, which are:

Your safety is the main priority. Police officers can be, and often are, assigned duties which involve danger and serious risks. Duties which involve emergencies or danger will not be avoided because you are present. With the ride, we responded to noise disturbance in Conklin Hall. When we responded, it was just students having too much fun at the ping pong table. After that, we patrol the campus. We check some of those buildings where classes don’t have sessions, like the old president’s cottage. After that, we drove around campus. Meanwhile, a few students got pulled over for the usual  traffic safety violations – blown out tail light, speeding, go through a stop sign. Take a ride-along and learn how to avoid being ticketed. Actually, there’s no secret to it: just don’t exceed the 25 mph speed limit, come to a full stop at Stop signs, make sure your vehicle has an up-to-date inspection sticker, etc. Word of advice – don’t speed on campus or you will be caught. How? Well, with the radar gun it can pick up someone’s speed from at least 1,000 feet, so by the time you see the officer and react it’s already too late. So do not speed on campus!!!

Ever in the rush to get to class and you don’t stop at the Stop signs? Well, be especially careful at Parking Lot 4, adjacent to the bus stop. When the lot is full, you can’t see the police vehicle at all. That’s where most drivers rolled through a Stop sign. Watch out at Lot 18 too.

What did I learned from the program? Well, some might say that they now know most of the hiding spots of University Police spots. However, you learn what’s like being an officer on campus – what issues they face when getting calls. It varies, so don’t expect 3-D action-packed like the show Cops, where they are doing police pursuits. What to except on the ride along? A lot of students tend to roll through Stop signs. You may be asking, where do I sign up? Answer is, just stop by the University Police building and ask for an application. Fill it out, and then UP does a background check.