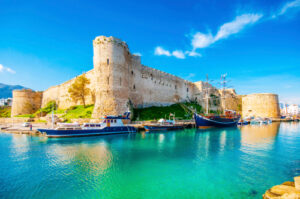 Here’s my experience with study abroad and my journey. I went to Cyprus in the summer of 2018 for exactly a month. Cyprus is located in the Eastern Mediterranean and is the third-most populous island in the Mediterranean, located south of Turkey. I took European Culture and Photography classes at the University of Nicosia. The course lasts for a month. The program also takes you to the various cities around the island, visit many of the tourist spots, as well historical places. By the time you leave the island, you will know all about it.

During the program, I met American students from different parts of the city. Some from Florida, California, Boston, etc. Without this program we would have no chance of meeting. It’s very interesting to me how we all gather at this one university that summer, taking the same classes, visiting the same island. You will never know whom you will meet and that to me is the most interesting part about study abroad. I met many great new friends from all over America, and the funny thing was that I was somewhere far away from my home. I met friends I never expected.

The university is located at the city of Nicosia, which in the inland of Cyprus. There are five major cities in Cyprus, which are Nicosia, Napa, Larnaca, Limassol, and Paphos. Every city beside Nicosia is located near the coast, so you get plenty of beach time each weekend. Each city coast is somewhat different from one another, so is very worth it visiting each city and look around.

Cyprus may be a small island, but it has a complicated history, just like any other country. Nicosia is the capital of Cyprus but it is also divided by “The Green Line.” We mostly stayed on the south side of the island, which is under Greek control. The north side of the “Green Line” is under Turkish control, which also is the less-developed side of the country. Crossing the north and south side of the island is just like crossing the borders, and till this day the citizen in Cyprus is very reluctant to cross the border to each side, even when they are allowed too.

The professor of European Culture class went over Greek culture, Greek weddings, and went even deeper into the history of Cyprus. The professor even took us on a tour around the “Green Line,” both on the Greek and Turkish side. For Photography class we played around with the camera and did a cool project. That class encourages me to always have the camera ready and be prepared to take a picture whenever that’s possible.

In the end, it was a great experience and it certainly helps me grow. Being thousands of miles away from home is scary but I ended up to learn a lot from this experience. I learned to be independent, to be self-efficient, and I get to see a different part of the world that I would never be able to see otherwise. The culture, the language, and the bluest ocean that ever exists in the world. This world is much bigger than you can ever imagine!