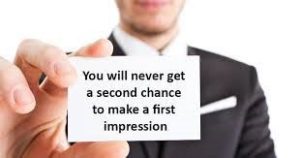 Have you ever heard “You never get a second chance to make a great first impression”? If yes, that quote is right. When you first meet people, their impression forms instantly based on the visual cues your face and body provide. They then go on to try to guess your age. The final cue to the impression you make on others is provided by your appearance and how attractive they judge you to be. You may be asking how does that apply to professors? How do I make a good first impression with professors?

1. Be aware of how you appear to others

You want to be sure that you’re presenting yourself in the best possible way. Prepare ahead of time to put your best self forward – clothing, hair, accessories. Make sure that every part of your appearance says what you want it to say to the people you’re meeting for the first time. This will make you feel your best and contribute to leaving a great first impression. It doesn’t mean come to class with a business causal look, but don’t come to class with your pajamas on. Your professor will be aware that you got dragged out of bed to attend class. Show up to class with your pajamas on, and your classmates would think “Dang that person is really lazy.”

2.  Be aware of your body language

Body language is a crucial part of first impressions. Body language is a type of non-verbal communication in which physical behaviors, as opposed to words, are used to express or convey information. Such behavior includes facial expressions, body posture, gestures, eye movement, touch, and the use of space. Studies have proven that it has four times more influence on first impressions than anything you actually say. Genuine smiles create better first impressions, as do firm handshakes, and purposeful eye contact. Often, simply being aware of your body language can result in immediate improvements. Try to avoid negative body language habits, such as touching your face or yawning out loud. Something I always do on the first day of class, after the class is dismissed, I introduce myself to my professor and shake their hand just to reinsure I’m a student and looking forward to the new semester.

This goes on what I mentioned earlier about greeting your professor after class. Don’t wait for the professor to make the first move to tell them about themselves. You can prepare ahead of time and learn something about the professor you’re meeting at sites like Ratemyprofessor, LinkedIn, or the Farmingdale website. These are useful tools to do your background research on your professor. Most professors have achievements or receive some sort of grant, which would be published on the Farmingdale website. For example, my public speaking professor McFadden won the Students First Grant back in 2017 – 2018. He was also recognized by the New York State Broadcasters Association, Inc. for Best Coverage of a Local Sporting Event as a member of WFUV’s NFL Draft team. That’s an interesting background for a professor. With research, you can gain knowledge about your professor

4. Pay close attention to what the professor is saying

Sometimes, in a stressful situation, it’s easy to let your mind sort of freeze. Don’t! Because if you’re sitting in their class and the professor realizes you’re not really paying attention, you’ve lost your chance to make a good impression. So, lean into the conversation and show that you’re hanging on to every word, to prove that you really are interested – and interesting. Ask questions!

Before entering in the classroom ask yourself this: are you putting on an act? You’ve got just the first day to make that great impression! With professors, initially on the first day of classes they tend to ask the class to go around and state your name, your major, and year you’re in. You have to do it with full confidence.