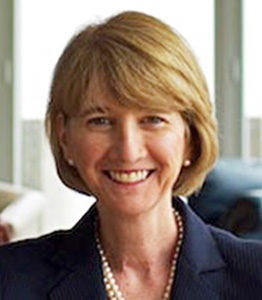 SUNY Chancellor Kristina Johnson was on LI recently, addressing business and education leaders at a legislative breakfast sponsored by the Long Island Association. And maybe the best thing about her remarks was her praise of the programs and initiatives here at FSC.

Speaking about the importance of partnerships between SUNY’s five LI campuses and the business community, she recognized FSC for its strength in that area.

“We are the training ground for tomorrow’s workforce,” the Chancellor said. “Through a network of partnerships with area businesses as well as government agencies, we give students the skills they require to work in today’s rapidly evolving economy.”

She then went on to mention two FSC programs that fit the bill, including the Natural Gas Technician Certificate Program with National Grid, and the Tesla partnership that includes internships and jobs after graduation. She also noted the Broad Hollow Bioscience Park for its initiative to house multiple tenants and create new jobs.

Finally, she cited FSC as one of the fastest-growing public colleges in the country (22% enrollment increase in the last five years), and noted FSC’s amazing track record of preparing students for jobs after graduation.

Chancellor Johnson also praised FSC in her State of the University System address. Her remarks echoed what she said at the LIA meeting, and can be found at approximately 16:50 of the video. If you can’t tune in, this is what the Chancellor said:

“Farmingdale State, for example, is now one of the fastest growing public colleges in the entire country, with its enrollment increasing by 22% in the last five years.  This is due in part because it has been so energetic in creating applied learning opportunities with local companies, including Tesla and National Grid.  Backed by the experiences they gain and the connections they make, nine out of ten Farmingdale State students land a job within six months of graduating, and half secure their jobs before leaving campus. That is success.”