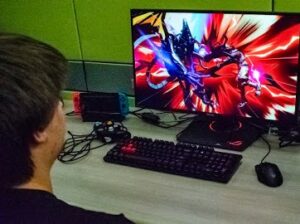 The Esports club participated in Hudson Valley (HV) Gamer Con on October 17-18. This is the premier National Championship event for the Eastern College Athletic Conference (ECAC).

Farmingdale Esports qualified for HV Gamer Con in two separate games: Super Smash Bros (SSB) and Overwatch. The Overwatch team was defeated in the first round but the SSB team claimed the National Championship after defeating Johnson & Wales, 2-1, in the finals.

FSC’s Cameron Olsen, a senior Computer Science major, was named MVP of HV Gamer Con. Olsen said “starting on the Smash Bros C team when I first joined the Farmingdale Esports and now becoming the MVP of HV Gamer Con feels so sweet especially in my graduating semester. This is a prime example of how you can grow as a player!” The team will be interviewed and featured in the November edition of the ECAC newsletter.

The content of this site is accurate to the best of our knowledge. Last updated 1/11/22