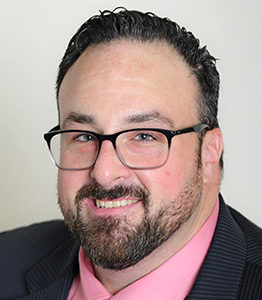 Dr. Brian Kelly, assistant professor in the Department of Security Systems and Law Enforcement Technology, recently filmed a segment on police body cameras for the nationally-syndicated PBS program, SciTech Now. An air date has not been announced.

SciTech Now captures the latest breakthroughs in science, technology, and innovation. Hosted by Hari Sreenivasan, the show explores the hottest gadgets, meets the innovators creating the startups of tomorrow, and maps out the mysteries of the scientific world.

Dr. Kelly is an expert in the use of body cameras. He was first in the country to introduce them as a teaching tool in a college classroom, and presented at Harvard Medical School’s International Journal of Arts and Sciences-Science and Engineering Division, on “Law Enforcement Technology Integration: A Case Study in Perceptions of Police Body-Worn Cameras in New Jersey.”

“My visit to SciTech Now was a great experience,” Dr. Kelly said. “I sincerely enjoy media engagements relative to my field of study, especially when I can share knowledge and engage in conversational topics that affect everyone, not just criminal justice personnel.”

The interview focused primarily on the evolution of the technology, and how police, as well as communities, perceive this policing tool as positive or negative. There was also discussion on evidence recovery and the advantages of video evidence for both police and those captured on video.

Sreenivasan also asked where Dr. Kelly foresees the technology going in the next five to 10 years. Dr. Kelly responded that, based on the percentage of police agencies mandating it already, a majority of police departments across the country will require it over the next five years.