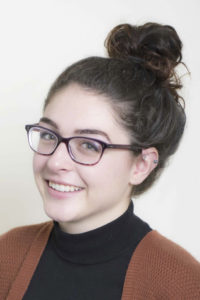 Hannah Ventaloro ’20 has won a Newman Civic Fellowship for her work in creating the Love Over Hate club.

Ventaloro, a Law Enforcement Technology major also studying Women, Gender & Sexuality Studies, was recommended for the award by President Nader, who said in his nominating letter: “Hannah is bringing issues facing underrepresented and marginalized students to the forefront of the FSC community and providing a space for students’ voices to be heard.”

In addition to Love Over Hate – which Ventaloro says “supports diversity and a safe and open dialogue for students to talk politically” – she has been as active as a first-semester freshman can be. She volunteered at this year’s STEM Diversity Summit and at President Nader’s inauguration, as a representative of the RAM program.

“Helping, fighting and advocating for others has always felt like second nature to me,” Ventaloro says. “I entered my freshman year of college determined to give back the same amount of love I have received over the years, and spread as much of it as possible.”

The Newman Civic Fellowship is awarded by Campus Compact, a national coalition of more than 1,000 colleges and universities committed to the public purposes of higher education.